Delayed in the mail, I got a birthday present the other day. It was sent by my sister, someone whom I believe has attended all of one major league baseball game in her life, certainly not more than a handful. She neither loves the game, nor knows it. But she loves her brother, which is plenty enough for me. We are not alone as a family that was unable to get together over the holidays, and I was touched by her thoughtfulness.

One of the items she sent stunned me, as it was a signed envelope on which a one-time Yankee player, Johnny Mize, is featured. I’ve always been fascinated by Mize for a number of reasons, none of which Sis was aware of. She just found this piece in a market somewhere, and figured — rightly — that her crazed Yankee fan brother would like it.

First, Johnny arrived in the Bronx the same year I did, in my case born to my parents in 1949. Mize had starred for National League teams in St. Louis and New York (the Giants) for 10 years around a three-year stint of military service in World War II. Top 10 finishes in several offensive categories (home runs, rbi’s, total bases, even a third-place finish and two seconds in the MVP vote) dot his years in the NL. His record of having hit three home runs in a game six times has been equaled just twice, by Sammy Sosa and now Mookie Betts.

But an aging Mize was no longer a full-time player when the Giants sold his contract to the Yankees as I was learning to walk in 1949. No longer a star, he was a valuable halfway player with a feared lefthanded power bat, and he would conclude his career clearing 37 fences and driving in 179 runs in the Bronx.

And in that beloved borough, Mize would set another mark, one unlikely to be ever matched. The Yankees are the only team to ever win five consecutive World Series titles, from 1949 through 1953. Johnny was on hand for all five of them, and only them.

Following the last one, Mize retired and left the Bronx. So did I, moving with my family across the Hudson River to New Jersey.

This is how I like to describe the crowning of Sue’s and my adventure to Chicago on Sunday, July 5, 2015. A 17-hour train trip up through New York State, a [relative] blink at a corner of Pennsylvania, and across Ohio brought us to the Second City, pride of Illinois. Traveling through the Independence Evening, we looked at our sojourn in the “All come to look for America,” Paul Simon perspective, and the hinterlands of several states did not disappoint. END_OF_DOCUMENT_TOKEN_TO_BE_REPLACED 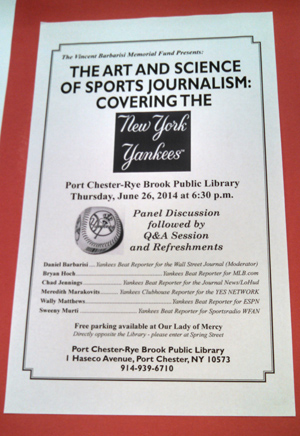 Port Chester, N.Y., June 26, 2014 — A long-winded and boring-sounding title for the event hosted at the Port Chester/Rye Brook Public Library Thursday evening, but this off night on the Yankees schedule was a blast. One of the laments six Yankee beat reporters shared with us is that in 2014, there really never is a moment that they’re not on the job — a tweeted report of an injury, a trade, a player release is potentially just seconds away. END_OF_DOCUMENT_TOKEN_TO_BE_REPLACED

Could not be more excited about the reopening of The Capitol Theatre in Port Chester — Bob Dylan was the perfect choice to get the party started again! With so many great shows and so many great places to eat, I have a feeling we won’t have any trouble keeping ourselves entertained in the offseason… END_OF_DOCUMENT_TOKEN_TO_BE_REPLACED Confession time: Down one run, I was hoping Derek Jeter would work a walk. Instead he made a little more history, and tied the game while he was at it.

August 17, 2012, Bronx, N.Y. – The Yankees beat the visiting Red Sox 6-4 in the Bronx Friday night, with the game’s start coinciding with a couple of innings of intensely bad weather, then settling into a rather pleasant evening, with the added bonus of a night lights show over the center field fence where the lightning had moved, along with the downpours, on to some other New York address. The Yanks pounded lefty Franklin Morales for four singleton home runs, three of them during the early downpours, and Phil Hughes made 105 very good throws in what was almost one of his best starts. END_OF_DOCUMENT_TOKEN_TO_BE_REPLACED Me and my new bff. Alex was engaging and receptive. I was astounded.

August 5, 2012, Bronx, N.Y. – I love writing game reports. It – the game – is what this baseball craziness is all about, and not only that, it was truly huge that the Yanks broke recent custom by winning a series, this with a 6-2 win over the Mariners in steamy Yankee Stadium Sunday afternoon. Struggling to get his variety of offspeed stuff over through five innings, Freddy Garcia succeeded in getting the win, and the bullpen retired 12 of 13 to finish the Mariners off. END_OF_DOCUMENT_TOKEN_TO_BE_REPLACED In case the huge structure in center field does not identify the location for you, these kids are playing on a field that four years ago was the field at the old Yankee Stadium, on the south side of 161st in the Bronx. That’s River Road and the elevated 4 Train beyond center field and in front of the mammoth Bronx County Courthouse. The moon appeared early in the fourth period, shortly before a blocked punt decided the game.

Bronx, N.Y., November 12, 2011 – The Rutgers/Army football game in Yankee Stadium Saturday afternoon was actually a quite competitive, though not particularly exciting, contest. Both teams missed extra points, and the Scarlet Knights place kicker whiffed badly on a chip shot field goal. But the failed extra point was much more injurious to the Army effort because it left them down a point, 13-12, as the game drew to its closing minutes. END_OF_DOCUMENT_TOKEN_TO_BE_REPLACED

From Phil Lesh on the Furthur.net boards on the passing of Owsley “Bear” Stanley:

I received a text in the middle of last night that Bear Stanley has died in a car accident in Australia. Bear, for me, was a true kindred spirit; when we first met, it was as if I had met a long-lost brother from another lifetime. I am heartbroken and devastated at his passing.

He was a friend, a brother, an inspiration, and our patron at the very beginning of our creative lives. We owe him more than what can be counted or added up — his was a mind that refused to accept limits, and he reinforced in us that striving for the infinite, the refusal to accept the status quo, that has informed so much of our work.
END_OF_DOCUMENT_TOKEN_TO_BE_REPLACED